We had five new members at the outing. Lou and Bob O assisted them with setup, flies, and showed them the river and our secret fishing holes. I hope we assisted them and they return to the next outing. I think about half of them got there first Casselman trout.

Bob O and I left early on Friday. Mainly I wanted to check out Town Creek. I heard rumors that the lower parking area was closed. The lower parking area is OPEN. Friday morning was rainy but stopped by 10 am. Town Creek was clear but slightly high, not bad, so we fished it. I was able to get 2 nice rainbows in the 12 inch range taking at least 20 minutes to bring in. The third broke my line, or bad knot, and lost my last black ghost tied in Bob Dietz fly tying class. Bob O went upstream and found a nice riffle next to a big hole and caught about 6 rainbows. 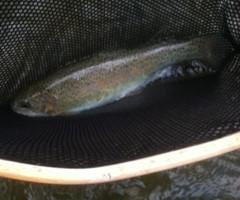 One of Lou's rainbow on Town Creek

By noonish, we left for Casselman River. I also wanted to explore the river and find these POSTED signs I have been hearing about near the stone Casselman bridge. YES, there are POSTED signs downstream (North) of the bridge and to Penn Alps Artisan center. Most are on the West side that people do not fish from. However there are 2 POSTED signs on the East side (where people fish from). One near the stone Casselman bridge about 10 feet just downstream and one further downstream (can't see from river but can see from the field) but well before the nice fishing/swimming hole behind Penn Alps. Also there is a new posted Fisherman Parking area behind Penn Alps! So one group doesn't want fisherman, and one group does!?

So how close to a POSTED sign can one fish? I heard that the bold and radical Outings Coordinator fished near the POSTED sign near the stone Casselman bridge and caught a nice rainbow. 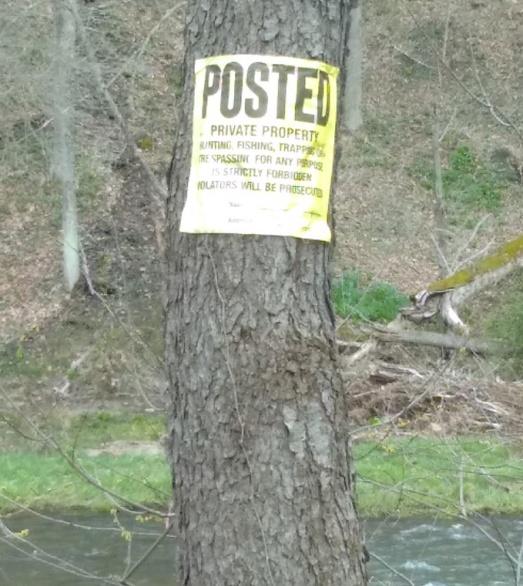 On East side downstream from bridge

On Friday the weather quickly was changing from cool cloudy to sunny blue sky and back to cool cloudy. The Casselman River was full but the water was clear. Alan, Bob K and George arrived in late afternoon and fished near the stone bridge and all were into trout. They noted caddis hatching when the sun came out. Bob K got 10+ with wet flies, pheasant tail and partridge and hare. The river was empty of fisherman. Bob and I fished at the Farmer's Lane by 2:00pm. Grannom caddish were active and a few BWO. Very few active trout on the surface. We were able to catch rainbows on wooly bugger, caddis pupa/emergers and dry flies. Bob O was able to get another 6 trout downstream of Farmers Lane bridge and caught his first of the year on a dry fly. Good day. Met Bob K, Alan and George at dinner at Casselman Inn.

Saturday, after large breakfast, we meet the new members at the Casselman Bridge (State Park). The day was much colder and windy. Started at River Road bridge and Clint caught a nice rainbow on a dry fly. Than we moved downstream, most pull offs were filled with people. We meet up with Alan, Bob K and George at the Farmers Lane. George was in one nice hole catching one after another using dries and wets. There was a caddis hatch but much less than Friday. Weather started to get colder and windy and few rain drops. By 5:00 pm, very little trout activity and most headed back to the motel and dinner at 6:30 at the Casselman Inn.

Sunday morning weather was cold, windy and snowy. The morning was at 29 deg and weather report was upper 40 deg. We had a nice breakfast at the Cornucopia Cafe, new place at the Penn Alps Artisan Center. Also a new fly fishing place, Maryland Mountains Fly Fishing guide and lessons.

After seeing some snowflakes, most decided to leave for home. By the time we got back to Columbia, the sun was out and blue sky.

Hope all had a good time. Until the next Outing, tight lines and tie at least 2 dozen flies. 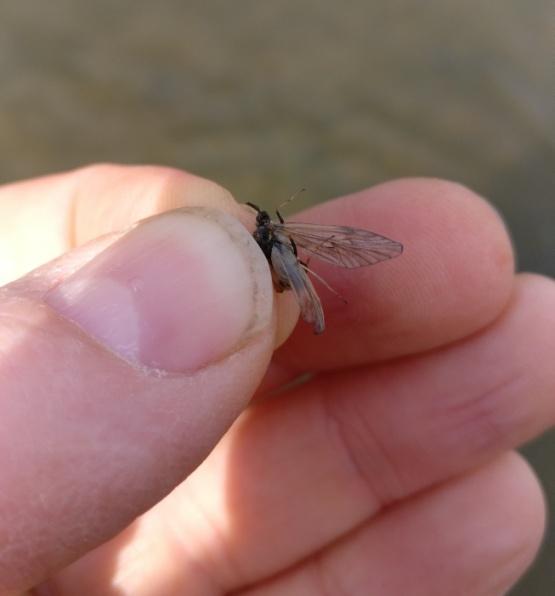 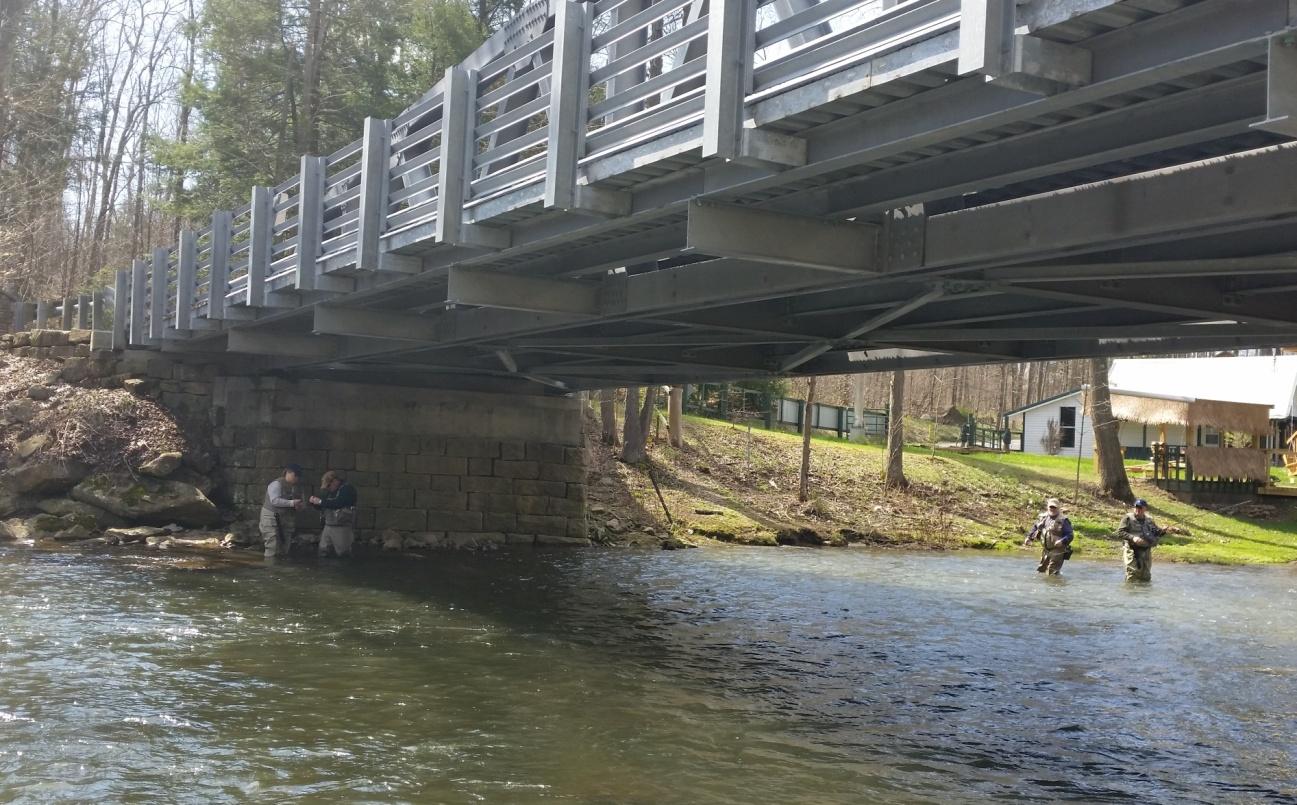 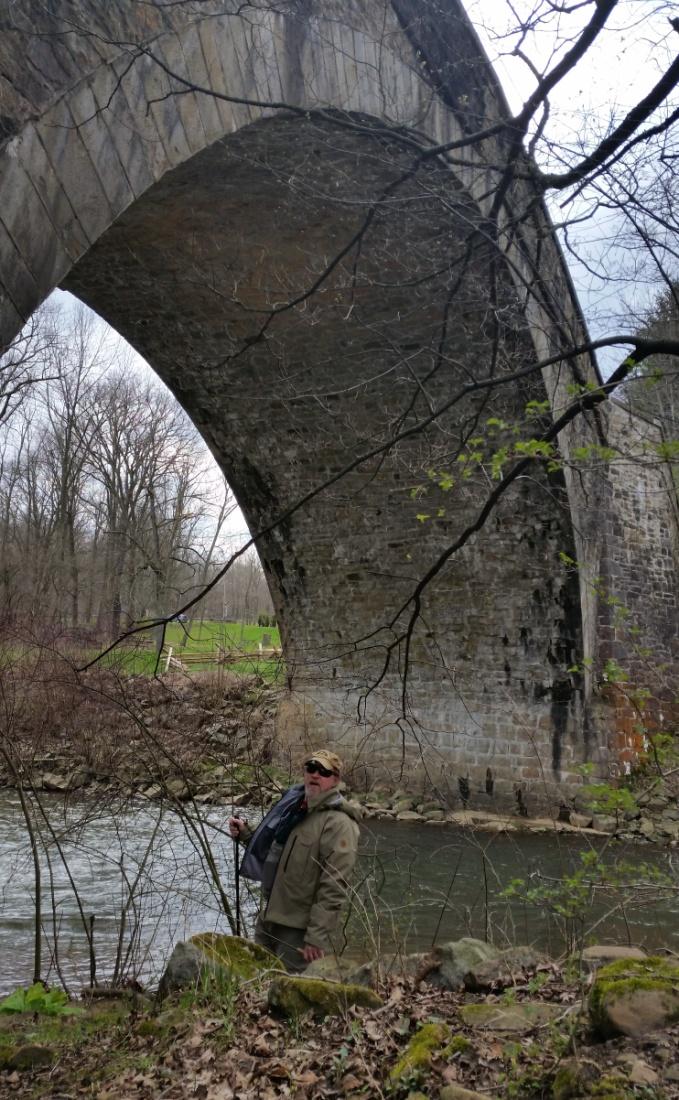 Bob O under Casselman bridge, just to right (downstream) is the Posted sign 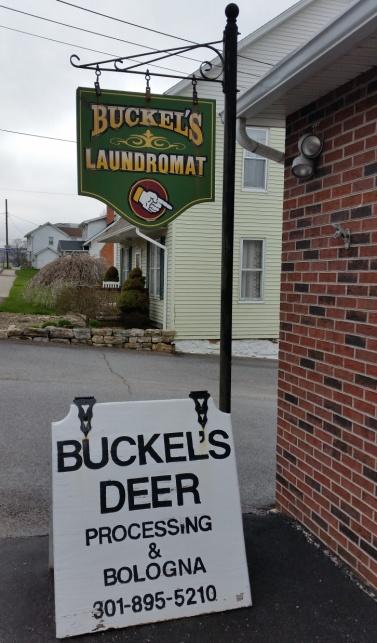 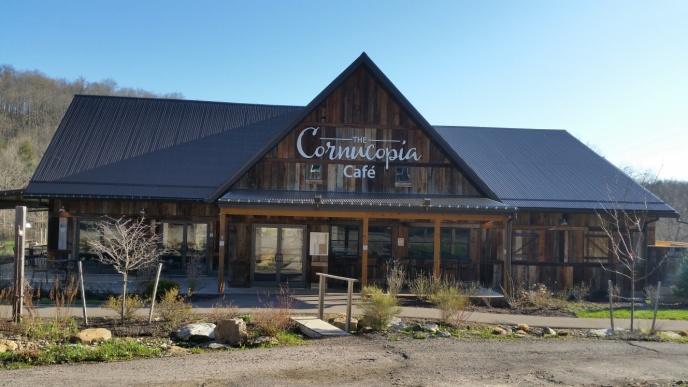 On Sunday morning after breakfast, Rodger and Ken surveyed the area north of the stone bridge. We found 4 trees on the east side of the river with posted signs like the photo above. The posted area covers a section of about 100-200 yards. There is still several hundreds yards of river including the "swimming hole" and down stream behind the Cornucopia Cafe that are not posted on the east side of the stream. The west side of the stream is posted from the stone bridge down to the River Road bridge.

While we didn't fish the Casselman Sunday due to the cold weather, on the way home we fished the new delayed harvest section of the Patapsco River in Sikesville. In about 1.5 hours of fishing, we each caught two rainbows on woolly buggers (black for Rodger, olive for Ken). We worked our way up stream from the downtown bridge in Sikesville, entering the stream on the opposite side from the railroad tracks. We found plenty of nice water covering about 1/3 mile of stream. Talking to another fisherman who had caught several further up stream, he reported even better fishing up stream beyond where we met him. We both enjoyed fishing here and will return to this section of the Patapsco in the near future.